Morality is a contraband in war. 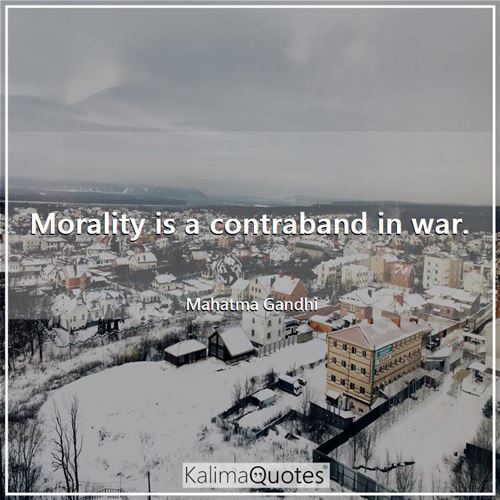 Religion is a matter of the heart. No physical inconvenience can warrant abandonment of one's own religion.

Adaptability is not imitation. It means power of resistance and assimilation.

If you don't find God in the next person you meet, it is a waste of time looking for him further.

Man has always desired power. Ownership of property gives this power. Man hankers also after posthumous fame based on power.

To forgive is not to forget. The merit lies in loving in spite of the vivid knowledge that one that must be loved is not a friend. There is not merit in loving an enemy when you forget him for a friend.

Ethically they had arrived at the conclusion that man's supremacy over lower animals meant not that the former should prey upon the latter, but that the higher should protect the lower, and that there should be mutual aid between the two as between man and man. They had also brought out the truth that man eats not for enjoyment but to live.

Ask the poor. They'll tell you who the christians are.

Seek not greater wealth, but simpler pleasure; not higher fortune, but deeper felicity.

What difference does it make to the dead, the orphans, and the homeless, whether the mad destruction is wrought under the name of totalitarianism or the holy name of liberty or democracy?

When asked what he thought of Western civilization: I think it would be a good idea.

Fearlessness is the first requisite of spirituality. Cowards can never be moral.

There is no ‘way to peace', there is only ‘peace'.